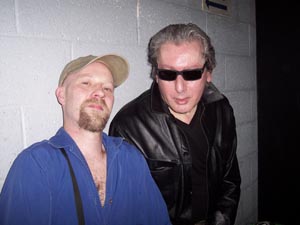 She Belongs To Me > Alain Bashung [c]

She Belongs To Me > Bob Dylan [Bringing it all Back Home, Columbia]

Childhood mishearing of lyrics: In “It’s All Over Now, Baby Blue” I used to hear “All your reindeer are a going home”

Alain Bas(c)hung (1947-2009), a French singer, songwriter, and actor and Barclay recording artist died of lung cancer on March 14, 2009. Bashung was the son of a Breton factory worker and an Algerian father whom he never knew. His mother remarried and he grew up in the Alsace countryside outside Strasbourg in a conservative environment, which led to rebellious reactions against conformity and authority as he grew up. When he was five years old he discovered music on the radio and early on already liked Kurt Weill, Jacques Brel and Brassens. He began playing harmonica in his youth and picked up guitar when he was 15 and joined a bluegrass band shortly thereafter. He left home at 17 and never turned back. He was already busking and playing Paris cafes when he was 18 and had written the hit “ Moi Je Préfère Ma Poupée” for Pussy Cat. In 1966, at 19 years old, he recorded his first singles, “Pourquoi rêvez-vous des Etats-Unis?”, “T’es vieux t’es moche” and “Petit Garçon.”

He was a much celebrated singer-songwriter in part because of his ability to be French but incorporate so many other influences – from Kurt Weill to Charles Trenet, Georges Brassens and Serge Gainsbourg. It is perhaps his very humble beginnings that made him a hero of sorts as well. Being handsome probably didn’t hurt. He is credited with reviving the tradition of the risque, naughty, pun-satirical chanson. He even collaborated with his hero Gainsbourg on “Play Blessures” in 1982. Gainsbourg wrote the acerbic lyrics and Bashung apparently wrote the music producing a less-than popular album of complex and interesting songs.

In 1985 he lent his name to to the anti-racist organization, SOS Racisme with 2 singles “SOS Amor” and “Touche pas à mon pote.” In the 1990s he went to Memphis, working with American musicians and came up with great cover versions of Buddy Holly, Bob Dylan and the Moody Blues, and three Baschung-Fauque songs, “Osez Joséphine”, “Volutes” and “Madame Rêve”.

Some of his other influences include Bob Dylan whose “She Belongs To Me”, among others, he covered. His “ C’est la Faute à Dylan” was a testimony to his influence. It is interesting that I received some Bashung music from Black Sifichi about a year ago along with a 1990s forgotten album by John Cale and I noticed there was some timbre-likeness, some elegant insouciance they both had in common.

Black Sifichi: “Yeah it’s too bad – really one of the real stars – Libération printed 13 pages about him! Here is a photo of me & Bashung – I played harmonica for him once in Strasbourg. ‘Novice’ is a great LP – produced by Blixa Bargeld.”

He was also obviously influenced in C&W-rockabilly style and sound by people like Hank Williams, Elvis, Buddy Holly and Gene Vincent – a and even admitted being influenced by the charming pop star Nino Ferrer but was not averse to the bracing and abrasive influences of punk and new wave. Besides Gainsbourg he also collaborated with Link Wray and Marc Ribot on “Chatterton” in 1994. His 2008 “Bleu pétrole” included an interesting cover version of Leonard Cohen’s “Suzanne.”

“Le dandy du rock” was buried on 20 March 2009 in Pere Lachaise after a 2 year battle with lung cancer.

There is plenty to read on him by just Goggling his name. As Pascal Descamps from the On-U list noted, his energy, presence, ambience, resistant stance put him in the realm of outfits like On-U sound. “If Adrian Sherwood reads this, I hope he could make a remix from ‘Samuel Hall’.”