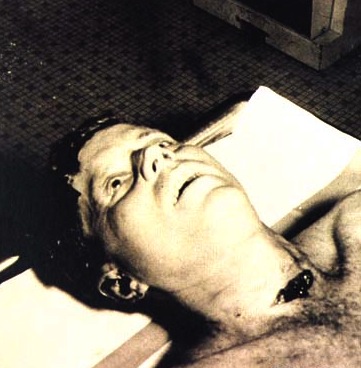 “We took care of Kennedy …The hit in Dallas
was just like any other operation we’d worked on in the past.”
• Sam Giancana, mobster

“.[I]t is the most bizarre conspiracy in the history of the world.
It’ll come out at a future date.”
• Jack Ruby

“The committee believes, on the basis of the evidence available to it, that President John F. Kennedy was probably assassinated as a result of a conspiracy. The committee is unable to identify the other gunman or the extent of the conspiracy.”
• Final Report, House Select Committee of Assassinations (HSCA), 1979

I still do a JFK show every few years as this event probably changed the US and how it views itself more than any single event including Vietnam or the Civil War. That a conspiracy was involved is not so much at issue any more but that it is so casually accepted, so cavalierly shrugged off remains troubling. I do not believe in ALL conspiracies  but the way “realists” have broad stroked every conspiracy with the same ugly paint is indicative of an exhaustion of info, sources, data, contrary opinions. That 9-11 or MLK or RFK may have involved conspiracies does not mean I am in that lunatic fringe where every human or political event smells of insidious human machinations.

That it’s the fetishistic preoccupation of way too many people is probably unhealthy but that it occupies the minds of inquiring souls of some integrity among who most seem to lean toward some sizable and significant conspiracy is interesting after all this time.

The most interesting testimony is the many who performed the post mortem on JFK’s “brain” – what brain, there was no brain left cuz it had been blown out the back of his head AND the fact that his body was taken all the way to Bethesda Maryland for the autopsy with a stop in between. Not only illegal but highly questionable behavior. As Paul K. O’Connor who helped perform the official autopsy noted: “The President’s brains were literally blown out of his head – there was no brain.”

That the Zapruder film may be the most analyzed and most important piece of amateur film footage in the history of film does not take anything away from what it seems to fairly clearly show: JFK’s brain shot out the back of his head.  That Jackie scrambled back onto the trunk of the limo to gather then brain remains in a state of shock should be 2 pieces of evidence that point to a 2nd assassin in front of the motorcade and that so many witnesses who swore this to be the case were never allowed to give testimony implies a tailor-made conclusion.

That so much went wrong [or right for those involved?] with JFK’s visit to Dallas is a bit difficult to attribute to mere human error or chance. Watching the secret service guards ordered to leave the motorcade and leave JFK unprotected as the open limo turns the corner is pretty interesting to see. The vociferous denial of those with interests in a cover-up all these years of any wrongdoing just seems disproportionate to the amount of evidence that would at least create some doubt in the conspiracy deniers.

In any case, the amount of evidence pointing to a conspiracy and knowing all of the forces [FBI, CIA, mafia, others] with an axe to grind against JFK were present in exceptional numbers in Dallas, and that Oswald declared himself a patsy for forces greater than the lone gunman theory would permit and that he was dead 24 hours later, killed by a guy with mob and fbi connections is, of course, incredibly coincidental beyond the realm of likelihood.

That this event changed America’s naive acceptance of its role as exceptional [morally upright] nation is an important change because ever since this tragic event, Americans have tried to resurrect this notion of exceptionalism time and time again, most recently with the disingenuous declarations of Obama – that the US is indeed different from all other nations and thus has a moral responsibility to lead the rest of the world. That this is no longer a given means that Americans have to mentally trick themselves into believing this notion of moral exceptionalism.

America had grown up and could never return to its postwar childhood of infinite rosy-colored stories of a positive future for everyone who chose to participate… Terms like Grassy Knoll and Magic Bullet Theory have entered the world of mythology. There’s plenty of literature out there, enough for a few lifetimes of reading…